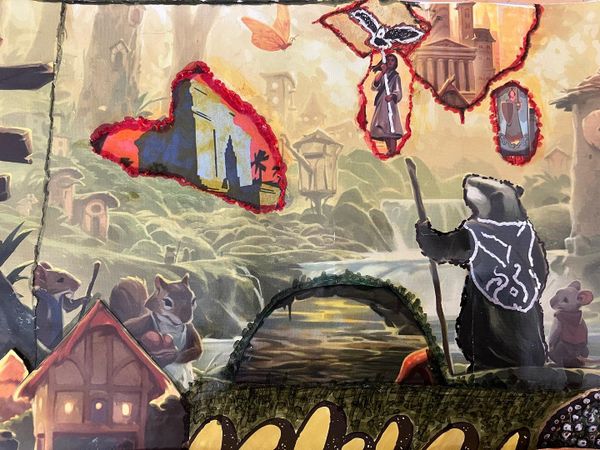 Ages ago in the time before Time, the Wars of the Gods escalated…
Gods fell from the Heavens as falling stars.
Daemons rose up from the Hells, shaking the foundations of the Earth.
The Veil between the worlds was torn asunder…
And the Fae returned to Middle-Earth.
Now the powers of the Gods and Daemons are silent and exhausted after the Wars, and the Glamoury of the Fae shines all over the World.
Magick has become chaotic and unpredictable after the GodsWar…a spell that fizzles or botches always have ‘interesting’ effects.
After the Gods War, the Powers became silent.
Most people acknowledge the Powers as a given force of nature, only some shamans keep the old traditions of sacrificing to the visible Powers:  Sun, Moon, Stars, Gaia, Fire, Water, Earth, Air

Many humans left their broken cities, becoming nomadic tribes.
Caravans are the lifelines between the settlements, trading merchandise and knowledge.
The Mercenary clan guards the caravans.

A caravan goes on the monthly trading trip to Starfall, a hunter/gatherer settlement nearby Lake Starfall.
It is a ominous settlement, where a God/Daemon fell from Heaven into the Lake at the end of the Great Wars.

The normal merchandise are tools, but this time also some medicine, because last month the messages from the settlement mentioned that the village elder was ailing.

Your Planet for All Things Sequential

From one GM to another.

It's about fundamental human rights.

The Confucian Weekly Bulletin
Notes From The Bunker

Indie RPG Publisher with a punk rock fuck all attitude!

A humble blog from Oddvin Vedø

Book Reviews: Scifi, Fantasy, and the stuff in between

An expedition through the world of roleplaying games

an RPG blog with pretentions

Bringing Games and Gamers Together!

RPG Reviews and Journeys in Gaming

The Runes, Rootwork and Sorcery of Brother Christopher

The pagan path. The Old Ways In New Times

A personal journal to share my artistic works, to write about Norse shamanism and traditional paganism, European History, Archaeology, Runes, Working with the Gods and my personal experiences in Norse shamanic practices.

I am Cynthia Moon

Let me help you figure it out

Exploring the mysterious connection between the Chinese and Jews