Q:
…would like to know if an organisation they are in is “CULT-LIKE” in nature  and whether it could hurt spiritually / mentally.…

A:
1. The intentions of the organisation regarding their members (set the intention to show positive cards if they want to help members grow etc and negative if it is an ill intentioned org).

1. We have no drama cards
2. We do have challenging cards
This shows me that the Organisation is not one of ill intent but they do have some “business issues” in that they probably keep some of the transactions hidden and are not totally transparent
But not a cult – just a secretive Organisation 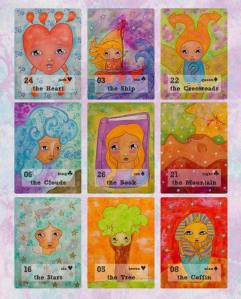 2. How Q will fair spiritually from the membership with this organisation.

We have 6 awesome wellbeing cards and only one troublesome – the cross where it sits with stork above shows me that the querent could actually benefit in the long term as it will aid them letting go of past trauma or painful issues … with tower central it could be an awesomely long and good effect on the querent
So in short – no not a cult and could actually be beneficial for querent’s wellbeing
….

The anchor and Dog show up. Well stablish belive system and loyalty.
They are a new organization that has a lot of money to spend tower + child + fish
There are some secrets regarding what they are committed to and their well-being is not known (ring + book + bear)
There will be a stressful change that brings stressful communication (stork + birds + rider)

It was cause discord with friends and she is going to experience miscommunication (dog + whip + letter) or maybe it’s referring to the membership itself will cause issues.
A partner or man will be upset about her membership (man + clouds + ring)
But ultimately her well being will be long term and stable (sun + tower + anchor)
…

What are the intentions of this organisation towards its members?
This looks as though they have a bit of a downer on things. Nothing intrinsically bad about the people, but some undermining of how members feel about themselves and a loop of anxiety around changes. It’s like saying, don’t be too optimistic.

How will the client fare spiritually?
Assuming the querent is a woman – she’s on top of it all, the more challenging cards are behind her but still pose a little discomfort. Otherwise she’ll be fine and committed to these changes – spiritually it may involve some journeying.
Overall I don’t believe it’s a cult but they are prone to being negative Nellies. The client isn’t letting this weigh her down though and may gain some good spiritual benefits.

WRITING THROUGH THE SEASONS

- allow the message of the cards to awaken your magnificence

Magickal musings as I walk through life on my solitary path.

A Journal of Workings

The Art Of Card Divination

Desultory Notes on the Tarot

The used key is always bright

The art of magic, applied

Exploring the theory and practice of divination

All about tarot history and historic decks

It's In The Cards

Welcome to the Squirrel Nest

Preservation, research, and teaching of traditional Lenormand skills and methods of this 200 year old European oracle.

The spirit of Kipper cards!

Teaching divination one method at a time.

Explorations with the Sibilla Oracle Cards

"Going to the fortune teller's was just as good as going to the opera, and the cost scarcely a trifle more - ergo, I will disguise myself and go again, one of these days, when other amusements fail." - Mark Twain, Letter to Orion Clemens, February 6, 1861

How to read divination systems by Madame 'Jozefa' Seaqueen

"Tarot helps you meet whatever comes in the best possible way."